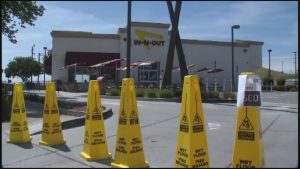 Livermore, Cali. (KRON/CNN Newsource) – Customers couldn’t get in or out of a popular burger restaurant in California Wednesday.

It was mass confusion outside the Livermore, California In-N-Out Burger.

A location that temporarily closed Tuesday night and all of Wednesday after a health scare.

Despite the cones outside would be patrons could be seen driving through the parking lot, stopping outside the restaurant, and making u-turns nearby.

Debbie Bruce was unaware of the closure.

She said, “We’re shocked because every time we come here there is traffic and people and cars all the way into the intersection of the parking lot.”

The department of environmental health says that nine members of a college softball team complained of flu like symptoms after eating at the restaurant last Saturday.

Officials suspect that the norovirus is to blame but have not yet confirmed that.

This Livermore In-N-Out burger has had past problems.

The county web site shows they were cited for a high risk violation in December of last year.

That involved surfaces, utensils, and equipment that was not cleaned or sanitized.

They had minor citations for the same problem just last month.

Bruce said, “It’s very concerning considering the amount of foot traffic and patronage that this place gets, I’m surprised this hasn’t happened sooner if that is the case.”

Employees with In-N-Out Burger say they don’t have any indications that there were any issues at this restaurant but they did clean and disinfect it along with screening their associates.

In a statement, In-N-Out Burger says its investigation did not reveal any problems at the location.

But it noted that customer health and well-being is a top priority for the burger chain.