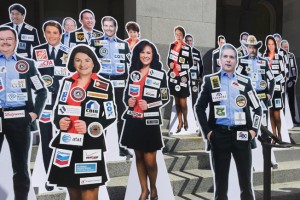 San Diego, Calif. — An interesting idea from a California businessman just might make it on the November ballot.

USA Today reports the petition by San Diego Republican John Cox would mandate all California legislators display the names of their top donors on their clothing anytime they speak on the floor, similar to NASCAR drivers’ uniforms.

According to a mission statement, the idea of politicians wearing logos has been floating around the internet for some time. In August, John Cox decided to make those memes a reality. The statement says that the California is Not For Sale initiative will bring a new level of transparency to politics.