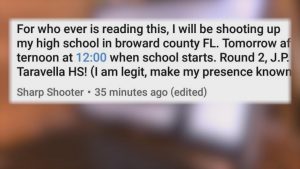 That school is only five miles away from the site of February’s mass school shooting at Marjory Stoneman Douglas High School.

17-year-old Buster Carlson was surfing YouTube music videos last week when he spotted a disturbing post in the comment section from someone saying they wanted to be a professional school shooter.

Carlson’s friend, Jacob Halley, took a screenshot of that original post, as well as an edited one, which read:

“For who ever is reading this, I will be shooting up my high school in broward county FL. Tomorrow afternoon at 12:00 when school starts. Round 2 J.P. Taravella HS! (I am legit, make my presence known).”

The boys learned what happened after reading a news report.

“It just said a student had been detained,” said Halley. “He had guns in the house. He had threatened on YouTube. I saw the exact same quote.”

Halley kept reading and found the words confirming their call to police made the difference.

“And then it said underneath, ‘A tip from California led to the arrest of the 17-year-old boy,'” said Halley.