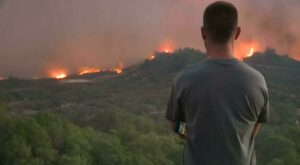 MENDOCINO NATIONAL FOREST, Calif. (CNN) — The August Complex Fire is now the largest in California’s history and has earned the special designation of a “gigafire.”

Wildfires have become so extreme that experts have had to coin new terms to describe them.

A “gigafire” is one that burns more than one million acres and the August Complex is California’s first in this category.

The term gigafire is the next step above what experts call a “megafire,” which burns 100,000 acres.

But the August Complex wildfire is not the first gigafire in the United States.

Previous fires in Alaska, Montana, and Idaho have also scored more than a million acres.

The world saw another gigafire in Australia where 1.5 million acres burned earlier this year.