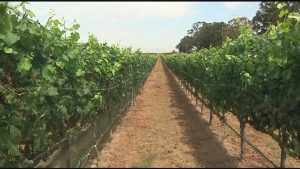 Murphy said, “Ideally 55 degrees is the golden temperature for me.”

Murphy said the heat wave that’s going to blast the Central Coast wine growing region and local wineries could spell trouble for those not equipped to protect their wines.

Keeping barrels, tanks and bottles out of the heat and direct sunlight is vital.

Murphy added, “Number one is climate control, any winemaker will tell you that the first thing that he’s trying to do is to just maintain quality, that’s what he is trying to do, and the biggest enemy of that is heat.”