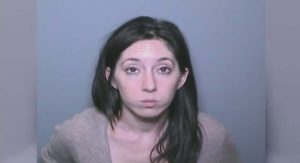 She gave the couple’s Anaheim address, and apparently a number of men showed up at their door.

Police say one man attacked the pregnant wife before she was able to call for help.

Neighbors say they saw police at their complex last week but they never dreamed that something so terrifying happened to the well-liked couple, expecting their first child.

Police say Michelle Hadley dated her ex-boyfriend, a U.S. Marshals Agent from 2013-2015, before he married. In June and July, Hadley is accused of sending his new wife emails, threatening her life and that of her unborn baby.

The wife filed a restraining order but Hadley violated it in June by stalking her.

If convicted, Hadley could face seven years to life in prison. She is now being held on one-million dollars bail. Her arraignment is scheduled for next month.