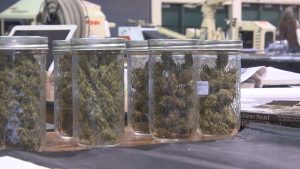 Medford, Ore.– The rise of legal marijuana in Oregon and California is leading to big business in the Rogue Valley and large events.

The Hemp and Cannabis Festival or THC Fair as many call it made it’s fifth showcase at the Jackson County Fairgrounds this weekend.

More than 100 vendors ranging from glass shops to smoke shops, horticulture to dispensaries were in attendance. The festival also featured lectures from experts in the industry about topics like growing, medicinal use and regulations.

“There are people who have never tried cannabis before,” said Mylissa Walker, manager of House of Leaves when describing the people who came to the festival. “So it’s really fun to talk to them and explain to them the new things that are coming out and that it’s not just a drug, their are medical purposes as well.”

The festival will be returning again next August for their summer festival.