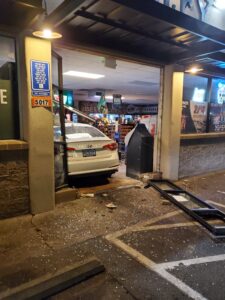 CENTRAL POINT, Ore. — The Lil’ Pantry in Central Point is picking up the pieces after a car slammed into it early Friday morning. The store manager said it happened just after midnight on Table Rock Road. He said the store was closed when the crash happened, and no one was inside.

The front doors are completely gone.

The employee says this is the fourth time in 20 years a car has hit the building. Most notably in 2016, a woman died after a man hit her car and then hit the Lil’ Pantry.

Police told the employee speed was a factor in the crash this morning. The store is expected to be closed for the next few days to fix the damages.