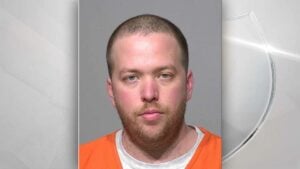 Prosecutors said on the morning of Friday, June 18, Oen Evan Nicholson was behind the wheel of his father’s white pickup truck when he ran over a Florida couple at the Mill Casino RV Park in North Bend. One of them, 74-year-old Anthony Oyster was killed. The other was seriously injured.

Police believe Nicholson then drove to a North Bend marijuana dispensary where he shot and killed 47-year-old Jennifer Davidson. After that, he reportedly went to a nearby store to buy more ammunition before leaving town.

After he fled, investigators found Nicholson’s father, 83-year-old Charles Simms Nicholson, dead in a trailer at the RV park where the hit-and-run happened. It was clear to police he died from homicidal violence.

The string of killings triggered a manhunt for a then-unknown suspect as people in the area were told to be on the lookout for a man captured on surveillance footage in North Bend.

Shortly after noon, a white Dodge pickup truck was found crashed on Highway 126 near milepost 39 in Noti, east of Eugene. There was nobody inside, but police believed it was the truck linked to the North Bend homicides.

Residents in the area were told to shelter in place as police tried to find the driver of a white sedan seen in the area shortly after the crash.

It was later discovered Nicholson somehow made it to Springfield, Oregon, where he allegedly took a driver captive while she was walking to her car while on a lunch break. Police said he held the woman at gunpoint and they drove over 2,000 miles to Milwaukee, Wisconsin where Nicholson turned himself in without incident.

With their homicide suspect now positively identified and behind bars, police continued the investigation.

On June 22, Oregon State Police asked for the public’s assistance identifying anyone who may have driven Nicholson from Noti to Springfield.

Nicholson remains behind bars in Wisconsin waiting to be extradited back to Oregon.