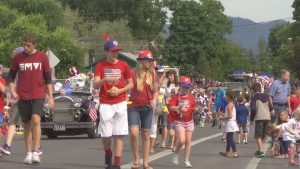 CENTRAL POINT, Ore.–Plenty of events were planned throughout the day for July 4th festivities in Central Point but what seemed to bring everyone out to celebrate was the city’s annual parade.

From local businesses to heroic service men and women, the parade entertained and showcased American pride.

One young resident described why he enjoyed Independence Day so much.

“It’s a tradition for Fourth of July,” said Ashton. “It is super fun to gather family and friends together and it’s just super fun to have.”

With over 82 floats, families were entertained by everything from local law enforcement to businesses like the Rogue Creamery.

Central Point has celebrated July 4th with a parade for more than 55 years.