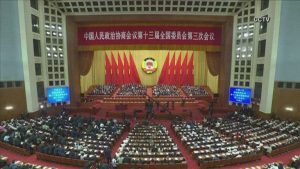 BEIJING, China (NBC) – At a political conference of the Chinese Communist Party, China moved to exert more control over Hong Kong and Macau.

The conference began Thursday with Chinese leader Xi Jinping entering the Great Hall of the People amid applause.

After the national anthem was played, there was a minute of silence in honor of those who died from the coronavirus.

The head of the “Chinese People’s Political Consultative Conference,” the fourth-ranked leader in China, spoke of improving the basic law of Hong Kong and Macau.

Demonstrators have protested for months in Hong Kong against a bill that would allow China to extradite Hong Kong citizens.

The protests were violent and widespread and shut down Hong Kong’s economy for weeks.

Thursday’s comments will spark worries that China will act to tighten its grip on Hong Kong.

Over 2,000 delegates attended. All wore masks. Xi did not.

The conference was carried live on Chinese TV.

The National People’s Congress, China’s version of a parliament, will get underway Friday.