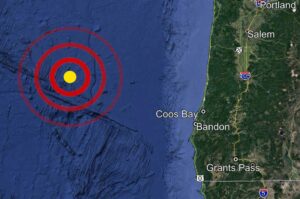 BANDON, Ore. – A cluster of small earthquakes struck off the Oregon Coast Wednesday and Thursday.

According to the U.S. Geological Survey, a magnitude 4.4 quake was recorded at 2:36 p.m. Wednesday about 180 miles west of Bandon near the Blanco Fracture Zone between the Juan de Fuca and Pacific Plates.

Over the next several hours, that quake was followed by six others in roughly the same area. The lowest magnitude recorded was 3.9.

Three quakes ranging between magnitude 5.2 and 5.4 were recorded between 3:30 a.m. and 4:00 a.m. Thursday. Several people reported feeling the quake from the mainland.

The latest quake happened at 6:33 a.m. Thursday. It was recorded as a magnitude 3.9.

All the earthquakes happened at a depth of over 6 miles.

So far, no damage has been reported and no tsunami warnings were issued.