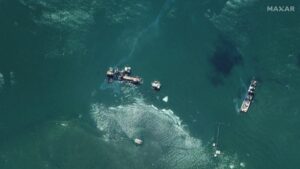 NEW ORLEANS, La. (CNN) – The U.S. Coast Guard is looking into hundreds of reports of oil spills in the Gulf of Mexico since Hurricane Ida.

The Coast Guard is conducting fly-overs off the coast of Louisiana as it investigates nearly 350 oil spill reports.

The fly-overs are focused on two locations. One is the enterprise offshore drilling rig in the Gulf of Mexico. The second spot is the Bay Marchand, which is south of Port Fourchon. Hurricane Ida made landfall near that area on August 29th.

The Coast Guard says they found a wellhead leaking oil five miles away from the Bay Marchand site. That wellhead has since been secured.