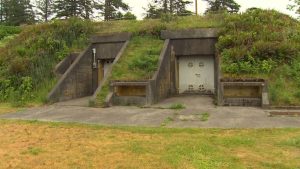 Olympia, Wash. (KING) — Washington State Parks is going to let visitors take a trip back in time this summer. Tours will be offered at what is known as “Battery 246” at Fort Columbia State Park near Long Beach.

Built during World War II to help defend the mouth of the Columbia River, the state took over the property in 1950. In 1960 it became one of three potential Emergency Operations Centers in Washington.

The others were at Fort Hayden in Port Angeles and in the basement of the student union at Washington State University in Pullman.

The EOCs were set up to allow the governor and top state officials a place to take shelter, live and operate the government for 30 days in the event of a nuclear attack.

Rusty bed frames, old sinks and toilets can be found in the dark, dusty battery. “I feel like I’m on hallowed ground when I’m in here,” said Stephen Wood, an Interpretive Specialist for Washington State Parks.