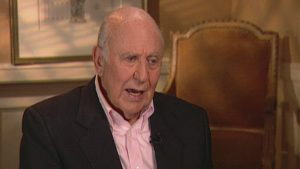 BEVERLY HILLS, Calif. (CNN) – Carl Reiner did it all. He was a legendary stand-up comedian, actor, director, producer, writer and singer who graced the silver screen for decades. Monday night, he passed away at his home in Beverly Hills.

His son, Rob Reiner, a Hollywood legend in his own right, shared the sad news on Twitter.

Born and raised in New York City, Carl was the son of Jewish immigrants. He was fixing sewing machines before his older brother introduced him to the world of performing.

Carl got his start acting in Broadway musicals but eventually, he was the one writing the shows. He’s best known for creating and starring in the Dick Van Dyke Show.

Carl married singer Estelle Lebost in 1943 and together, they had three kids. They were married for 64 years, until she passed away.

Not long before his death, Reiner tweeted, “Nothing pleases me more than knowing that I have lived the best life possible by having met and marrying the gifted Estelle Lebost, who partnered with me in bringing Rob, Annie & Lucas Reiner into to this needy & evolving world.”