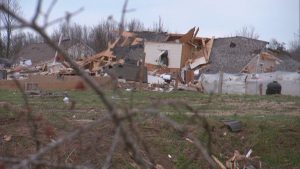 NASHVILLE, Tenn. (NBC) – Just days after a deadly tornado tore through parts of Tennessee, including Nashville, some of country music’s biggest stars are banding together to raise money to help the music city get back on its feet.

Friday morning, the buzzing of chainsaws and the rumbling of trucks provided a new soundtrack for Nashville’s biggest challenge yet: rebuilding after a disaster.

Some of those fortunate to survive a massive EF-4 tornado are now living with tarps on the tops of their homes, thanks in part to the helping hands of neighbors, swooping in from all directions.

In this battered region, victim search efforts are finally over…

Putnam County Mayor Randy Porter said, “We have no reported unaccounted people as of right now.”

For the families of the 24 people killed and hundreds displaced they’re about to get a major boost from some of country music’s biggest stars. They manned a telethon Thursday night, netting almost $400,000 for victims.

Haywood said, “It really kind of wrecked all of us. But I’ve watched Nashville stand up and I’ve watched everyone link arms, and stand for what they believe in which is helping each other out.”

Social media was flooded with messages of support, everyone from country legends Carrie Underwood and Dierks Bentley to Keith Urban and Reba McEntire.

Tennessee native Dolly Parton is pulling for those affected, saying, “Just wanted to shout and say ‘We’re with you.'”

Dan + Shay announced they’ll donate proceeds from their tour kickoff in Nashville this weekend  to the relief efforts.

And that iconic “I Believe in Nashville” mural still stands strong next to a shredded concert venue, now proudly printed on t-shirts with all of the profits going to disaster relief.

President Trump will tour the disaster area Friday. He has declared this a federal disaster emergency which paves the way for more money to flow to residents, living in areas where their former homes are now unrecognizable.