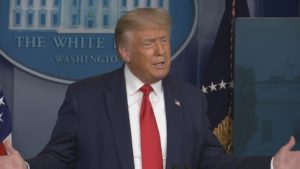 WASHINGTON, D.C. (NBC News) – With three days to go, Democrats and Republicans are making little progress on unemployment benefits that run out Friday.

Republicans claim many are earning more than when they were working.

“We should not be taxing somebody who’s been stocking shelves for months so the government can pay her neighbor more than she makes to sit at home,” Senate Majority Leader Mitch McConnell argues.

“I happen to believe in it. I would take it. As you know, I took it for a 14-day period, and I am here. I am here. I happen to think it works in the early stages,” Trump said Tuesday.

Scientists cite mounting evidence that the drug does nothing to stop the virus.