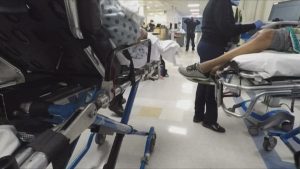 WASHINGTON, D.C. (NBC) – President trump is downplaying a spike in coronavirus cases across the country and preparing to head to Mount Rushmore for a 4th of July celebration even as medical experts warn of the dangers of large crowds.

President Trump on Twitter overnight blamed the surge in virus cases on more testing and called that great news while medical experts stress the rate of positive cases is going up and urge all Americans not to let our guard down this weekend.

At the start of the holiday weekend, President Trump prepared for major events at mount Rushmore and Washington, D.C., as leaders across the country are urging people to avoid large crowds that could become coronavirus super spreaders.

Miami Beach Mayor Dan Gelber said, “The only thing we have really, are people deciding that they’re going to take control of this.”

A record-breaking surge is already stretching hospitals to the limits and shutting down struggling businesses once again.

“It’s devastating,” business owner Myriah Richey said. “We have been open now for two weeks since the last shutdown, and now we’ll have to shut down again.”

The new reopening rollbacks are not reflected in another record: 4.8 million American jobs added last month.

President Trump said, “Our economy is roaring back, it’s coming back extremely strong.”

The president’s Democrat rival accused him of declaring victory in the middle of a crisis. Joe Biden said, “We’re still down nearly 15 million jobs and the pandemic is getting worse, not better.”

Lawmakers agree the country needs another relief package but heading into a two-week recess, they’re still far apart on what to include.

Senate Majority Leader Mitch McConnell (R-KY) said, “It’ll be very carefully crafted, and it won’t be the $3 trillion left-wing wish list like the House cobbled together.”

Speaker of the House Nancy Pelosi (D-CA) said, “If we don’t do the direct payment — put money in the pockets of the American people — we’re going to be in a worse economic situation.”

America is entering Independence Day weekend in another fight for its future.

As medical experts are stressing the need for masks to slow the spread, some states are getting serious. Texas now has a statewide face covering order while one sheriff in California is handing out $300 tickets to those not wearing one.