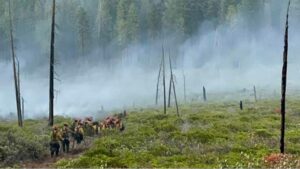 LAKE COUNTY, Ore. – With high winds in the forecast, crews fighting the Cougar Peak Fire say Thursday marks the “calm before the storm.”

The Forest Service said the Cougar Peak Fire was found at about 1:45 p.m. on September 7 approximately 15 miles northwest of Lakeview and about 1.5 miles east of Cottonwood Campground. The next day, the fire was an estimated 3,200 acres in size. However, wind and low humidity during the day and evening caused the Cougar Peak Fire to grow by over 17,000 acres in just a few hours.

On the night of September 9, the fire was estimated to be 37,000 acres in size with 0% containment. By the following morning, that number skyrocketed to 83,339 acres.

Recent weather conditions allowed for many successful operations including burnouts, construction of contingency lines, and mop-up activities. However, by Thursday the effects of the rain were beginning to diminish and the fire was more active within contingency lines. A fire behavior analyst called Thursday the “calm before the storm” as increased winds are in the forecast for Friday and Saturday.

The Cougar Peak Fire is 6% contained.