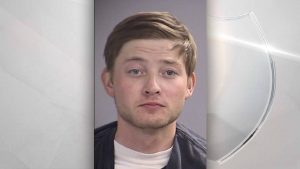 MEDFORD, Ore. – A suspect who allegedly assaulted a man and took his SUV was arrested Wednesday night.

The Medford Police Department said on the evening of July 22, a man was going between different vehicles asking for money in the parking lot of the Dairy Queen on Morrow Road. Just before 6:30 p.m., the man approached a 2007 Chevy Blazer occupied by a 55-year-old man eating food and opened the door. The suspect told the driver to get out and a fight between the two ensued.

According to MPD, the suspect was able to gain the upper hand in the fight and took the victim’s vehicle. The suspect hit another vehicle in the parking lot before driving off.

At about 8:40 that same night, a person reported seeing a suspicious person in their Withington Street neighborhood. That man turned out to be the suspect involved in the assault and vehicle theft that happened earlier in the evening.

Officers said they surrounded the area and took the suspect into custody. He was identified as 25-year-old Andrew Nicholas Seelig.

The victim’s vehicle and most of his property was recovered.

Seelig was lodged in the Jackson County Jail on numerous charges including robbery, unauthorized use of a motor vehicle, and reckless driving.