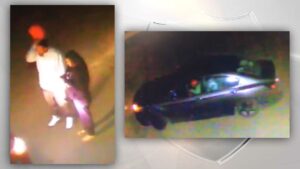 RUCH, Ore. — Police are asking for help identifying two people sought in connection with a mail theft case in the Ruch area.

The Jackson County Sheriff’s Office said on October 30, numerous people in the Upper Applegate area told investigators their mail boxes were tampered with the night before.

Investigators eventually found surveillance video that was captured at about 2:00 a.m. that morning. It shows two people arriving at a Ruch-area retailer’s parking lot. After they parked, they walked around their car, possibly looking for damage. They are then seen dropping white items in the parking lot. Those items were later determined to be mail.

The sheriff’s office described the vehicle as a dark four-door sedan, possibly similar to a Honda. It has aftermarket, dark-colored five-spoke wheels.

The first suspect is described as a man with dark hair and a beard. He was wearing a red hat, a light-colored sweatshirt, jeans and white shoes.

The other suspect is described as a woman with long, dark hair. She was wearing dark clothes.