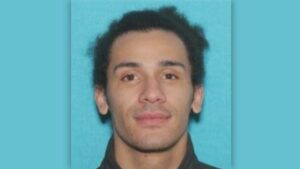 PORTLAND, Ore. (CNN) – Police have identified a suspect after a man was beaten unconscious during protests in Portland.

They have identified 25-year-old Marquise Love as one person involved in an attack on a pickup driver Sunday.

Police say a group of protesters chased the driver before he crashed his vehicle.

He was then dragged out of the pickup and, according to witnesses, beaten up by up to ten people.

Officials are calling on Marquise Love to surrender.

Investigators say multiple videos of the incident have been posted on social media but they say the videos don’t clearly show what led to the incident.

The driver has been released from the hospital and he’s recovering.

“The Portland Police Bureau is taking this assault and other incidents of violence extremely seriously,” said Chief Lovell. “Our Detectives continue to investigate this assault as well as other acts of violence directed toward protestors, but we need more than just videos from social media. In order to hold individuals responsible for criminal acts, we need the public to provide information and refrain from tampering with evidence.”