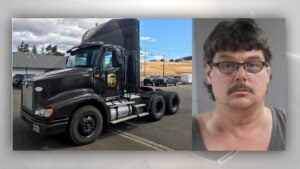 MEDFORD, Ore. – A UPS employee from Roseburg is accused of shooting at vehicles while driving his route.

Oregon State Police said on the evening of August 19, a woman driving northbound on Interstate 5 was struck by a bullet near milepost 37 between Central Point and Gold Hill.

The woman was hospitalized and later released, according to investigators.

After the shooting, OSP troopers found a UPS tractor-trailer in Roseburg that was believed to be tied to the shooting. The truck’s driver was identified as 49-year-old Kenneth Alan Ayers of Roseburg.

On August 20, OSP arrested Ayers for attempted murder and numerous other charges. He was lodged in the Jackson County Jail.

OSP said Ayers shot at the vehicles from the truck while driving on I-5.

Investigators will not reveal what type of firearm Ayers allegedly used.

UPS sent out the following statement: “We are appalled to hear about these allegations and are fully cooperating with the responding authorities. Firearms are prohibited at UPS facilities and in our vehicles, and we are extremely concerned for the other motorists and individuals who have been affected. We’ll defer further comment to the investigating authorities.”