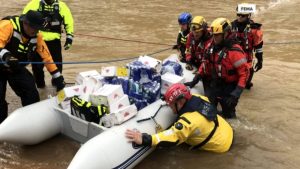 (NBC News) – As Puerto Rico deals with a lack of power, food and drinking water in the wake of Hurricane Maria, residents are also in dire need of another commodity: Cold hard cash.

And that means what little other resources are available often can’t be purchased by those in need.

“The cash is running out, for a lot of us,” said San Juan resident Monica Morales by phone on Thursday.

Morales said people were waiting on hours-long lines at any ATMs that happened to be open in the hopes of taking out money.

“There’s a lot of tension, it’s hard to find water and food right now and we still don’t have any supermarkets open near us,” she said.

Morales said security was beefed up at the banks that were running, but in the days after the storm she heard stories of people robbing those who were able to take out cash.

She said her own cash was running very low, and though she had financial support from her family on the mainland there was no way to access it without internet and power.