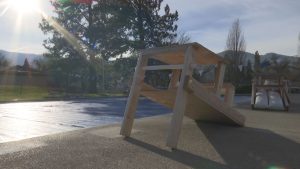 Ashland, Ore.– Daniel Meyer pool has been a part of the Ashland community for nearly three decades. With that much time, the pool has never been fully renovated rather minor fixes have been made to equipment and machinery malfunctions.

Coach Lantry remembers when they had SOU’s pool which provided a place for the high school aquatic teams to perform and train competitively. They can still do this at Daniel Meyer but the outdoor pool does not provide the ideal accommodations he would like – especially in winter when it’s swim season.

“It could be snowing on them. They’re jumping out of the pool and getting on the block to practice their dive and they don’t want to get out, they’re getting cold,” he said. “Yeah it’s hard, it’s hard for the team.”

Ashland Parks and Recreation may have a plan that could eventually help not just the competitive aquatics of Ashland, but the general community as well.

“We think the one that we have now with Daniel Meyer pool is rebuilding it, the pool, where it is today,” said Michael Black, director for Ashland Parks and Recreation. “Taking advantage of the infrastructure we already have is the most logical explanation.”

Other long term solutions have been proposed before this such as working with SOU or the local YMCA to build a new pool that everyone could use, but most fell through for various reasons.

The cost of the newest plan Parks and Rec has come up with would likely cost between $3.5 million to $7 million which would still be cheaper than building a brand new pool.

Sally Wiggins, a mother of a high school water polo player and board director of the Ashland High School water polo team, thinks that this will benefit more than just the aquatic sports teams. The economic boost it would give to the town could be significant.

“A tournament in Ashland brings families and swimmers and water polo players to Ashland to use our hotels, to use our restaurants, to go to the OSF,” she said.

Having a pool that can be used year-around could also be useful for other schools in the area that don’t have a pool as well such as Phoenix/Talent School District or even masters programs for recreational swimmers.

Plans to complete the project are still a long way off. The Parks and Recreation Commission is planning to meet with the Ashland School District on January 29th to discuss the project. In it, they’re hoping to use a school bond to help fund part or all of the construction costs. That bond will be on the November ballot.

Still proponents of the pool are excited to see where it goes.

“Having more space in, we could do more at the same time,” said Coach Lantry. “With a larger plan that [Black’s] got we can even a have swim team in here while there’s swimming lessons going or some other lap swim. It would be awesome.”