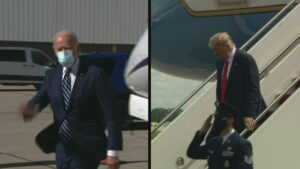 WASHINGTON, D.C. (NBC) — President Trump and Democratic rival Joe Biden rallied in key battleground states Friday after a pair of televised town halls, notable both for the questions the two candidates answered and the ones they did not.

The presidential candidates picked up the pace on the campaign trail going into the weekend. President Trump hit two battlegrounds with appearances in Georgia and Florida.

In Fort Meyers, the president promised to fast-track vaccines to seniors. “To immediately deliver the vaccine directly to nursing homes at no cost,” he said.

Joe Biden in Michigan focused on healthcare. “I promise you,” he said, “when I’m your president, I’ll take care of your health coverage the same way I would my own family.”

The candidates made their swing state stands after simultaneous town halls. The president was often argumentative under tough questioning from NBC News’ Savannah Guthrie, saying he couldn’t remember whether he’d taken a required COVID test the day of the last presidential debate three days before entering the hospital.

He appeared to admit to being some $400 million in debt, saying “What I’m saying is it’s a tiny percentage of my net worth.”

He refused to denouce the fringe QAnon conspiracy theories, that Democrats and celebrities are satanic pedophiles, and that President Trump is their savior. “I know nothing about QAnon,” Trump said.

Guthrie replied, “I just told you.”

“What you tell me doesn’t make it fact,” the president said.

Biden’s town hall with ABC News’ George Stephanopolis struck a calmer tone with detailed policy discussions. But he still would not tell voters clearly whether he supports adding justices to the Supreme Court.

Stephanopolis asked, “So you’ll come out with a clear position before Election Day?”

“Yes, depending on how they’ve handled it,” Biden explained.

It was a head-spinning, channel-swapping night previewing the final in-person presidential debate next Thursday in Nashville.

The president and Biden largely avoided talking about each other Thursday night, though each said the other candidate was not the right person to handle the pandemic.