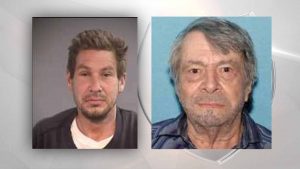 Daniel Burda is charged with manslaughter, criminally negligent homicide, abuse of a corpse and identity theft.

According to a police affidavit obtained by the Oregonian, Burda told police last July he shoved then 75-year-old Dennis Day to the ground in his Phoenix home. Then he hid the former Disney Mouseketeer under a massive pile of clothes.

State police found a body this April that’s believed to be Day’s.

The outspoken Burda pleaded not guilty to the crimes in July.

On August 29, Burda’s attorney filed paperwork requesting a hearing to determine if Burda is mentally fit to stand trial. She attached a 21-page psychological examination. NBC5 News was unable to acquire a copy, as it isn’t part of the public record.

Defense attorney Christine Herbert said Burda will be transferred to the Oregon State Hospital because of a “mental disorder.” He’ll remain at the hospital until it’s determined he’s able to continue being tried in connection with Day’s death.

The case against Burda remains open, with his next court appearance scheduled for November 18, 2019.