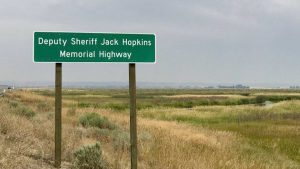 MODOC COUNTY, Calif. – Signs dedicating a northern California highway to the memory of a fallen Modoc County Sheriff’s deputy have been installed.

In October 2016, Deputy Jack Hopkins responded to a family disturbance call. When he arrived at the scene, he was fatally shot. The suspect went on to engage in a shootout with Sheriff Mike Poindexter, but he was eventually arrested.

“It is nice to finally have these signs up,” the sheriff’s office wrote. “We want to thank Assemblyman Brian Dahle and his staff as well as our beloved Modoc County Sheriff’s Posse for their generosity, time and efforts in making this happen. We can say with absolute certainty this would not have come to fruition had it not been for their efforts. Thank you all so very much!”