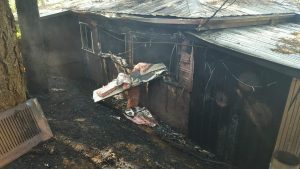 Grants Pass, Ore.- Oregon State Police have released the names of those involved in a shooting early Thursday morning, as well as potentially related arson at the same address.

Detectives say 24-year-old Michael Hockersmith showed up at 4444 Highway 199 early Thursday morning and got into a fight with two people who live at the address, 64-year-old Richard Weiss and 46-year-old Ronnette Gideon. At some point during the encounter, Gideon shot Hockersmith. Weiss called 911 and emergency workers took Hockersmith to the hospital, where he’s in critical condition.

Investigators say Weiss and Gideon cooperated with the investigation. After serving a search warrant, detectives arrested Gideon on the suspicion of Attempted Murder and Assault in the 1st Degree.

At approximately 2 p.m., as Oregon State Police detectives were preparing to leave the crime scene, they heard glass break in the back of the house. When they checked it out, they saw large flames. Detectives, patrol troopers and a K-9 unit searched the area to find the person responsible for the fire, but were unsuccessful.

Several fire crews helped douse the flames, however the home was severely damaged.

Oregon State Police is now conducting an arson investigation. Anyone with information is asked to call OSP at 541-776-6111.