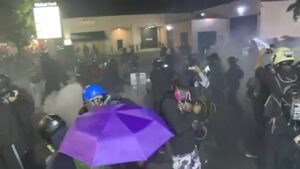 PORTLAND, Ore. (CNN) — A report from the Department of Homeland Security’s watchdog criticizes the agency for its deployment in Portland last summer.

The department’s inspector general concluded more than 700 officers were not trained properly and didn’t have the right equipment.

The officers were deployed to Portland to protect federal facilities amid violent protests demanding racial justice in the city.

They came from the Federal Protective Service, Customs and Border Protection, Immigration and Customs Enforcement, and the Secret Service.

The final report says some officers did not have shin guards, face shields or protective eyewear.

Many officers also reported problems with radio communications which prevented them from coordinating with officers from other agencies.

The IG also wrote DHS did not establish consistent uniforms for the officers.

Many members of the public complained at the time they did not know which agencies the officers represented.