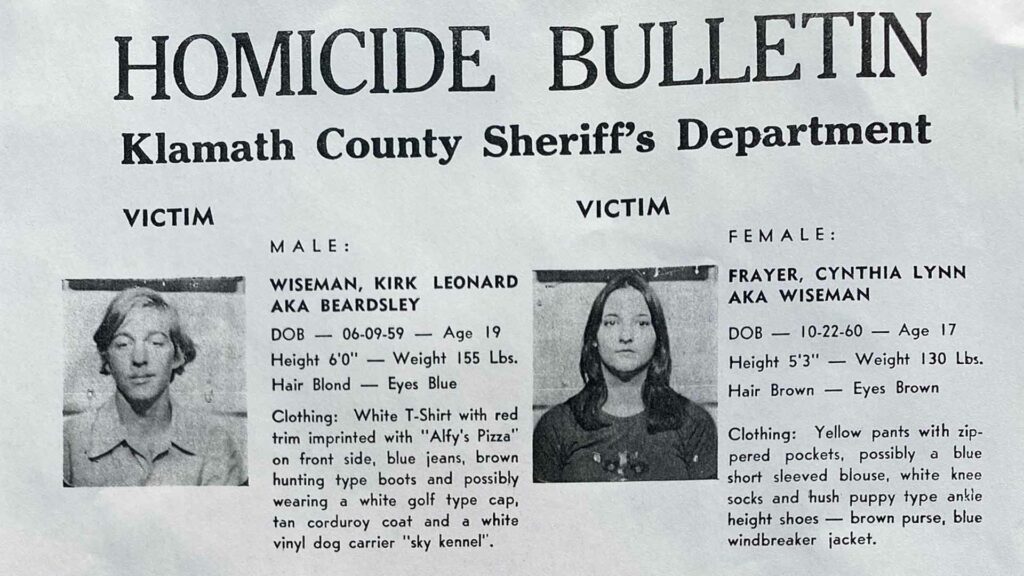 KLAMATH COUNTY, Ore. – Family members of two people who were found dead in rural Klamath County over four decades ago may finally have some closure.

In late September of 1978, Cynthia Frayer and Kirk Wiseman were hitchhiking from Eugene to Klamath Falls. After leaving a Roseburg hotel, the pair disappeared.

The following month, Frayer and Wiseman’s bodies were found near Lake of the Woods. They were both shot in the head with a small-caliber pistol.

After the discovery, the Klamath County Sheriff’s Office began an investigation that led to a man who said he picked the pair up on Interstate 5. For a time, he was among the prime suspects. However, he was never arrested and is now deceased.

The case went cold without any new developments for 40 years. That was, until 2018 when DNA evidence was submitted to an Oregon State Police crime lab. They came back with a positive result, identified as “Unknown Male 1.”

Investigators ran the DNA through a national database, but they didn’t get any hits. The evidence was then handed off to Parabon, a private laboratory that uses DNA to track down potential family members. Through that, a genealogist took over and worked backward.

In the early summer of 2021, Parabon released a report giving detectives a viable suspect and a name: Ray Mason Whitson Jr., a Klamath Falls lumber mill worker who died in 1996.

Investigators said Whitson was never a suspect before and his name never came up. He apparently had very little to no criminal history.

Investigators are confident they have identified the killer as Whitson, and they hope the new revelation brings closure to the families of Cynthia Frayer and Kirk Wiseman.