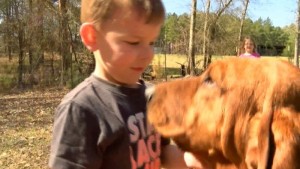 (KPLC) A hunting dog is being hailed as a hero after helping find and rescue a missing Louisiana toddler.

Three-year-old Eli Alcock wandered away from his Florien, Louisiana home last Tuesday. Drowning in fear and desperate for help, mother Lindsy Alcock turned to the community.

Doug Downs heard about the missing boy and sprang into action, along with his dog Honey.

With her keen sense of smell, his hunting dog Honey has quite the reputation. Though Downs admits the idea was a long shot, he dropped everything. He and Honey were determined to help anyway they could. “The pressure was on because you’re asked to come do something that you’ve never done before,” Downs said.