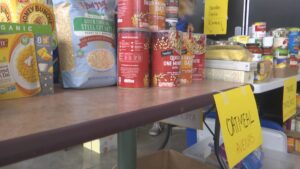 ASHLAND, Ore. — Not far from the donation center at the Shakespeare Festival, another one is set-up at Ashland High School.

This one has a large selection of food, clothing and supplies for people affected by the fires.
It’s open everyday until at least this Wednesday, from 11 a.m.- 2 p.m.

The organizers say they believe thousands of dollars worth of supplies have already been given out.