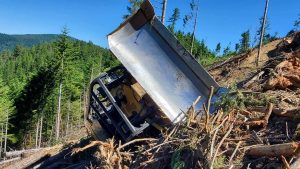 ROGUE RIVER, Ore. – A bulldozer operator was rescued after a logging accident near Rogue River.

The Rogue River Fire District said on the morning of June 22, the operator was carving a new road along on a steep mountainside when his dozer hit a tree stump and rolled over on its side.

The operator was hurt an unable to climb back up the hillside, so Rogue River firefighters responded along with the Evans Valley Fire District, the Jackson County Sheriff’s Office. Together, they were able to carry the injured operator about a quarter-mile up a steep 70-degree slope. He was then airlifted to the hospital.