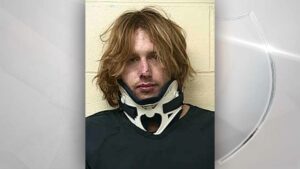 SELMA, Ore. – A man who led police on a chase in Josephine County was arrested after a two-vehicle crash.

On the evening of June 3, a Josephine County Sheriff’s Office deputy tried to pull over a vehicle on Redwood Highway near Selma. However, the vehicle didn’t stop and sped away southbound.

An Oregon State Police trooper joined the deputy in the pursuit, which continued onto Lakeshore Drive toward Lake Selmac.

Another trooper deployed spike strips as the vehicle continued back onto Redwood Highway before crashing into an oncoming vehicle. The suspect vehicle came to rest in a ditch along the roadway and the driver was taken into custody.

That driver was identified as 28-year-old Gavin Moore. He was lodged in the Josephine County Jail for numerous charges including attempting to elude, reckless driving, reckless endangering, criminal mischief, and hit-and-run.

The driver of the vehicle Moore hit declined medical treatment at the scene.