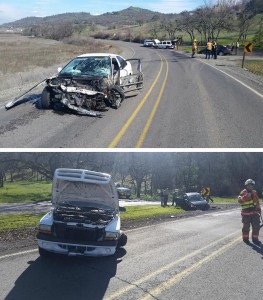 Jackson County, Ore. — Officers say a Honda Civic was driving southbound on Foothill Road on Monday around noon when it lost control and struck two other vehicles.

According to a Jackson County Sheriff’s Deputy, the Honda was traveling at an excessive rate of speed when it crossed into the oncoming lane of traffic and struck a Dodge Durango in the right front portion of the vehicle. The Honda then went on to side-swipe another vehicle before finally coming to a stop.

Police say a total of four people were injured in the accident. The driver of the Honda, who was not among those injured, was arrested on charges of reckless driving and assault.