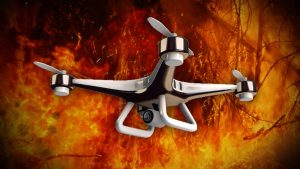 MEDFORD, Ore. — The Bear Creek Greenway is always a huge fire risk in the summer months. Four fires were extinguished in Medford this past weekend alone. Now, local agencies are working on a new program to keep a closer eye on the Greenway.

“We’ve been developing our drone program for about two years now,” said Rogue Valley Council of Governments (RV GOC) executive director Michael Cavallaro. Drones will soon be used along the Bear Creek Greenway to help prevent wildfires from spreading. Medford Fire-Rescue said they have responded to 115 fires on the Greenway this year, so far.

“I think in general we are seeing wildfires, the numbers, growing all together. I think this bike path, with its contiguity from Ashland all the way to District 3 is just getting far more use than ever before,” said Medford Fire-Rescue Deputy Fire Marshal Samantha Metheny. RV COG’s drone specialist said thermal cameras on drones is a proactive, rather than a reactive approach. He added they they don’t record any of their footage. “It keeps a lot of privacy for the people on the greenway. Instead of waiting for a fire to pop up, we’re coming out here and we’re kind of looking for it in order to stop it from growing,” said RV COG drone specialist James Gerhardt.

RV Cog said they are ready to take off, county commissioners have already approved the plan. Now, they’re waiting on the city of Medford to give the go-ahead. “The main idea is to find hotspots or campfires before they become a major problem on the Greenway,” said Gerhardt. Once the drones begin flying, it will be up to the city of Medford to determine how often they take off. If a fire is spotted on the drone, the pilot will then call the appropriate fire agency—depending on what jurisdiction they are in to put it out.