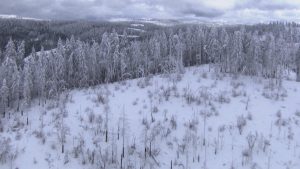 The Sierra snowpack typically reaches its peak depth and water content by the start of April, giving water managers an idea of how much runoff they will see for drinking water, rivers and agriculture.

This winter included a bone-dry February with no measurable precipitation in the northern Sierra.

In the central and northern half of the state, the number is slightly better at 56%, while the southern Sierra snowpack is only 45% of average.

“Last year we had the fifth-best snowpack in recorded history. This year we have the 11th worst,” Chris Orrock with DWR said. “Look at the last four years. 2016 was the end of the drought. 2017 was the wettest year on record. 2018 was below average. Last year, huge year—great snowpack. And then this year well below average as well. I think we’re going to keep seeing that wet to dry, wet to dry.”

The snowpack typically provides roughly a third of California water supply and is often referred to as the state’s largest reservoir, holding water in the high country until it slowly melts and fills reservoirs into the hotter, drier months.