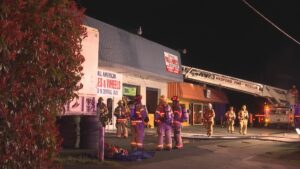 MEDFORD, Ore.— Medford Fire Department was called out to a fire at the All American Tires and Wheels just after midnight Wednesday morning.

MFD says when they arrived, they found black smoke coming from the back of the building. The fire was found inside of an office on the second floor and had spread to the roof.

Multiple units from Medford Fire Department and Jackson County Fire District #3 were called out. Around 30 personnel worked to put the fire out.

North Central Avenue at Edwards Street was shut down for nearly two hours in order to reach the fire hydrant.

Firefighters say because of the hazardous conditions of the tire shop, it took them roughly 30 minutes to knock it out.

We’re told there was damage to the office, roof, some inventory, and part of a storage unit.

A restaurant connected to the building was not impacted.