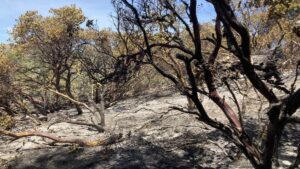 The fire started on the afternoon of Saturday, May 29 in the 9600 block of East Antelope Road.

Level 2 evacuations were issued for some nearby homes as the Jackson County Sheriff’s Office worked to establish roadblocks.

Numerous ground crews and air resources were dispatched to help establish a line around the fire and keep it contained.

The day after the East Antelope Fire started, crews were able to get the fire completely lined as they worked on mopping up. The fire was estimated to have burned about 49 acres as evacuation levels dropped.

Using a drone for guidance, crews worked overnight to put out hot spots on the edge of the fire. By Monday morning, the fire was about 90% mopped up.

No homes or structures in the area were damaged.