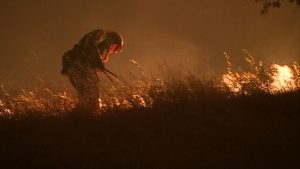 (NBC News) – At least eight people are dead and nearly 900 homes and other structures have been destroyed as wildfires continue to burn out of control across California.

One of the most severe is the Carr fire, burning near Redding, which has destroyed nearly 500 homes and left six people dead.

“Extreme is not even the right adjective to use anymore,” says Cal Fire Division Chief Chris Anthony, “It is just an understatement because fire is so explosive now in California.”

At least seven other people are still missing in areas hit by the Carr fire.

Other fires have proven deadly as well.

Fire Captain Brian Hughes was killed while working with his hotshot team along the front lines of the Ferguson fire near Yosemite National Park.