Portland, Ore. – A used record contained an emotional note about an Oregon man who had passed away years before.

Portland NBC affiliate KGW reports that a Reddit user shared an image of a mint-condition vinyl copy of Soundgarden’s “Superunknown” that he bought online. The image shows a note tucked inside the album cover. 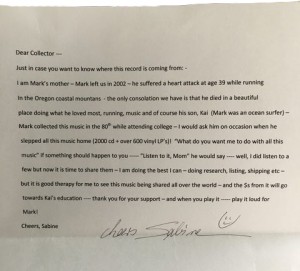 The heartfelt note reveals the album had belonged to a 39-year-old Oregon man named Mark, who died but left behind his sizable music collection. The note, apparently written by Mark’s mother, says Mark died in 2002 after having a heart attack while running in the mountains near the Oregon Coast.

According to the note, Mark’s mother is selling her deceased son’s music collection to honor his memory, and pay for Mark’s son’s education.

The note reads, “”Thank you for your support — and when you play it — play it loud for Mark!”

More than 150 items from Mark’s collection are still for sale online through Discogs.com seller Obamina.