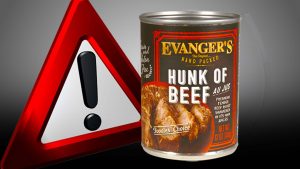 (NBC News Channel) — A euthanasia drug found in dog food has prompted an Illinois pet food company to issue a recall, following the death of a dog.

Evanger’s Dog and Cat Food Company is recalling five lots of its 12-ounce cans of “Hunk of Beef Au Jus” out of an abundance of caution after detecting one lot was contaminated with a euthanasia drug called pentobarbital.

Five dogs have become ill and one of them died after consuming the product.

Consumers can return the product to the place of purchase for a full refund.

Any consumers with questions or concerns regarding the dog food recall may contact Evanger’s at 1-847-537-0102.