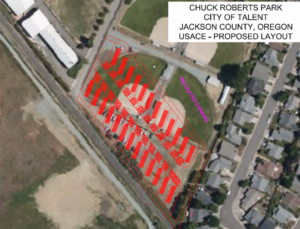 TALENT, Ore. – A plan to create more housing for fire victims could use the south side of Chuck Roberts Park in Talent.

The announcement was made during a special session held by Talent City Council Friday night.

An executive order was signed Friday, allowing FEMA to conduct a preliminary exploration study on converting two of the four Little League fields at the park.

If needed, the site could provide temporary shelter for 25 to 29 families. According to FEMA, some 130 families that qualify for assistance remain without housing five months after the Almeda fire burned through their communities of Phoenix and Talent on September 8th, 2020.

FEMA said their first pick for building a Direct Housing Mission site is the burn pads of previously standing trailer and RV parks. However, FEMA representative Duke Davis said they must first determine those sites are safe and free of hazardous materials. According to FEMA, the fields would serve as a contingency location.

If the park site was used, Phoenix-Talent Little League’s President Erin Parent says it would impact approximately 150 children who plan on using those fields soon.

At Friday’s meeting it was announced that the Little League could use the Phoenix-Talent School District’s fields at Culver Field. Parent said there were scheduling and field size problems to overcome with that proposal.

FEMA also said it could restore the site after it is used, at the city’s discretion. Parent told NBC5 News it would cost over $200,000 to restore the fields.

Under FEMA’s regulations, this type of housing can be provided for up to 18 months following a disaster. With five of those months already passed, Interim City Manager Jamie McCleod-Skinner said the Governor could request a six month extension after that time.

As officials work to meet the needs of the many fire victims who remain unhoused, McCleod-Skinner also encouraged the public to share any viable recommendations for temporary housing locations with the city.