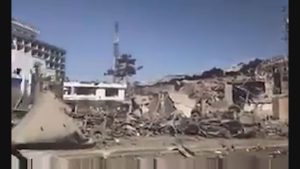 Kabul, Afghanistan – At least 80 people were killed and more than 300 wounded after a suicide bomb was detonated in Afghanistan’s capitol city early Wednesday, officials said.

The bomb hidden inside a sewage truck was triggered at a time when Kabul’s roads were bustling with rush-hour traffic.

According to the Health Ministry, many of the casualties were civilians, including women and children.

11 U.S. citizen contractors were injured, but none of the injuries are considered life-threatening.

The explosion occurred near the in what is considered a normally safe neighborhood near foreign embassies protected by blast walls and guarded by police and national security forces.

A spokesman for Kabul police said it was hard to tell what the exact target was.

The U.S. Embassy is located in another part of the city around a half-mile away.

No group has claimed responsibility for the attack yet, but the Taliban said it had nothing to do with the explosion.