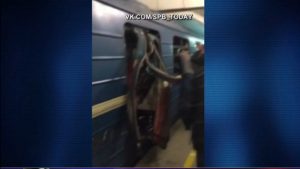 St. Petersburg, Russia (NBC Newsource) — Russian officials said Monday at least ten people were killed and 20 injured when an explosion tore through a train car in the St. Petersburg subway.

The blast hit the train as it traveled between stations about 2:20 p.m. local time.

The driver chose to continue on to the next station, reducing the danger that passengers would die by trying to walk along the subway’s electrified tracks.

There was no immediate claim of responsibility for the attack.

Within two hours of the blast, Russia authorities had found and deactivated another bomb at a different subway station.

The entire St. Petersburg subway system, which serves some two million riders a day, was shut down and evacuated.