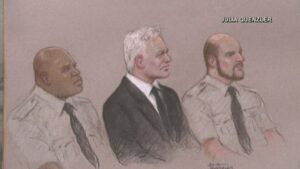 LONDON, England (NBC) — WikiLeaks founder Julian Assange is still fighting to avoid extradition to the United States to face criminal charges over the activities of his WikiLeaks website. His long-delayed extradition hearing is now underway Monday in the U.K.

Clean-shaven and wearing a suit, Assange sat in a London courtroom between his lawyers for proceedings that were delayed several months due to that country’s coronavirus lockdown.

U.S. authorities accuse Australian-born Assange, who is now 49, of conspiring to hack government computers and of violating an espionage law in connection with the release of confidential cables by WikiLeaks in 2010-2011.

During Monday’s hearing, Assange formally declined to be extradited to face a superseding indictment issued by American authorities in June.

His father and the current editor of WikiLeaks spoke outside court Monday where they were joined by several protesters demanding Assange not be extradited and instead released.

John Hipton is Julian Assange’s father. He said, “I think the case is a fraud against the court, that’s what I think. Fraud against the court applied by the American Department of Justice. Julian is an Australian citizen, the publication is in the United Kingdom and yet he is kidnapped and judicially abducted to the United States to spend 175 years in jail.”

WikiLeaks Editor-in-Chief Kristin Hrafnsson said, “Well, it is up to the lawyers and they are now in very limited time space trying to deliberate with their client. They haven’t met in person in six months so now they have a lunch break, what will they do? It is up to Julian to decide. I mean what can you do when you are faced with this repeated injustice on every corner, on every corner in this bloody process? it’s an outrage.”

Assange’s legal battles in Britain date to 2010 when he began fighting an attempt to extradite him to Sweden to answer questions about allegations of sexual assault, which have since been dropped.

In June 2012, facing imminent extradition, he sought refuge in the Ecuadorean embassy in London. He spent seven years holed up there.

His partner, Stella Moris, revealed this year that he had fathered two children while inside the embassy.

After Ecuador revoked his asylum, he was dragged out of the embassy in April 2019 and served a short British prison sentence for violating bail terms.

He remains jailed pending the outcome of the U.S. extradition request.