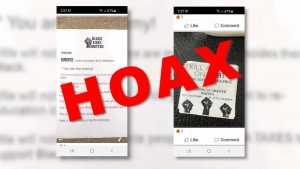 The fliers have the Black Lives Matter logo and a hashtag for Antifa – the political movement built to protest fascism. Posts on social media say the fliers were found on cars in Ashland.

However, Ashland police say they haven’t seen any of them or received any reports.

“As of now it’s an unsubstantiated social media rumor that has no truth,” said Chief Tighe O’Meara.

If you look further into the fliers, it becomes more evident they’re a hoax. On one of them, the hashtag “BLMScotland” can be traced back to fliers handed out in towns around the United Kingdom.

The Scottish newspaper, Evening Telegraph, wrote an article about the fake posters that BLM and Antifa activists cited as being used to discredit the movement and incite unnecessary fear and violence.

That tactic it seems is clear to local police as well.

“What we’ve seen for the last several weeks is that far-right fringe groups are calling for violence against white people to stir the pot and make sure the conversation cannot remain productive,” said Chief O’Meara.

The hoax is common enough that the fact-checking website Snopes has looked into the flyers. It found one originated from a fringe Twitter feed and was then spread through a Russian website.

Ashland Police says if anyone is posting hate speech and defacing property with it, you should notify them.