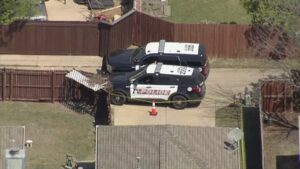 ALLEN, Texas – A Texas family of six was found dead after two teenage brothers reportedly carried out a murder-suicide pact.

Allen police discovered the bodies while performing a welfare check at a home around 1:00 Monday morning.

The names and ages of the victims have not been confirmed, but police said they included a grandparent, two parents, a sister, and the two teen boys.

Police believe the killings may have happened over the weekend.