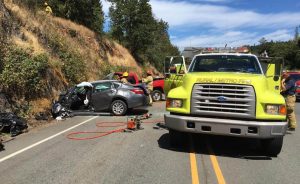 Multiple agencies responded to the accident on Redwood Highway near milepost 12 just before 3:00 p.m.

Rural-Metro Fire says people in both vehicles were trapped. The pickup truck involved in the accident was on fire.

The occupants were removed from the vehicles and two people were transported to the hospital with significant injuries.

One patient was pronounced dead on scene.

The Oregon Department of Forestry was called in to check for spot fires on the hillside.